Taking to the global stage: a spotlight on the JMUCC student experience 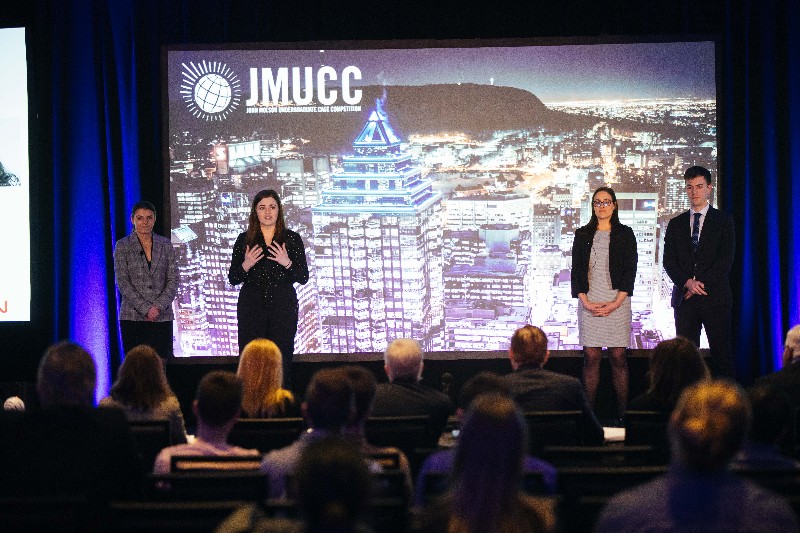 Among the 24 business schools that were selected to compete in Montreal this year, was a team from Cork University Business School, UCC, made up of Aoibhe Martin, Alex Deane, Becca O’Connor and Megan Culloty.

Motivated by their own individual ambition, the CUBS quartet were selected by Dr Noel Woods, Dr Ed Shinnick, Peter Finnegan (Director of the Blackstone Launchpad at UCC), and James Furlong (representing KPMG as sponsors of the CUBS team).

“The internal selection process was rigorous. Teams from across the Business School took part in a two-day competition.

Each team were presented with a problem and had to solve it through a combination of big-picture thinking and detailed analysis.

Initially, we were on opposing teams, but in the end, Dr Noel Woods selected the four of us to represent CUBS”.

Throughout the weeks that followed, the team prepared for JMUCC with the help of faculty.

As the competition loomed, the weekly schedule of preparation gave way to a daylong session in the Rochestown Park Hotel, where the CUBS team were put through their paces in an environment that aimed to replicate the challenges they would face in Montreal.

Although we felt a little overawed when we first arrived in Montreal, we understood the nature of the competition and what to expect.

Once we got over the initial shock of seeing our names listed alongside teams representing really prestigious universities - we were okay.

We kept asking ourselves, how bold do we want to be?

We knew we had to strike a balance between playing it safe and being too ambitious”.

“Teams are awarded points based on their performance in each case – it’s not necessarily about beating the opposition in the head-to-heads – although that helps!!

For example, we only won one of our divisional ties but we managed to make the final. You need to be competitive in every round”.

On the opening day, The CUBS team hit the ground running, scoring 10 points from a maximum of 12 against Dublin Technological University. An incredible score that was only bettered by two other teams during the opening three rounds.

“The first case really suited us. We had to develop a recruitment strategy for an accountancy firm that would allow it to match up against the big four companies without jeopardising their culture or values.

The case felt very real because one of the firm’s partners was judging the competition.

We struggled on the second day against the University of Toronto because we didn’t possess the knowledge to really engage with the case set by a fashion firm who wanted us to develop a proposal that could reduce their environmental impact but maintain quick turnaround times.

In the final head-to-head against Universidad Panamericana, we were tasked with designing and marketing a banking app aimed at people who were not typical savers.

We won and were awarded nine points, meaning that we were in with a chance of topping our division and qualifying for the final if we performed well in the 24-hour challenge”.

Safe in the knowledge that they had performed to the best of their abilities, the CUBS team relaxed the following day, climbing Mt. Royal with members of the other teams.

The panoramic views from the peak provided a welcome relief to the CUBS quartet, who stood on the brink of qualifying for the final of the competition.

Standing in their way was an intense 24-hour case that would see the CUBS team go up against their divisional rivals one last time.

Beginning early on the penultimate day of the competition, the 24-hour case would test the team’s endurance, resolve and their ability to collaborate under pressure.

“We had no idea what lay ahead of us. At 9:30 am we received a USB key containing the brief – the optimisation of CN’s train service at the Malport intermodal terminal.

Throughout the day we were landed with surprises and new information. You needed to be able to adapt at a moment’s notice.

Alongside each of the other teams, at 12:30 pm we got the opportunity to ask CN Rail’s Head of Innovation a series of questions via Skype.

But because each team could listen in on the questions, you needed to be strategic. This made things a little difficult because we were working on a specific concept that incorporated the use of environmentally friendly wide span electronic cranes with rubber tyres!!

Just as we thought we were making progress, at 3:30 pm, we were told that the terminal employed a workforce that was both unionised and non-unionised. Which meant that we were having to look into change management practices as well.

By 6:30 pm we were confident in our concept and began working on the slide deck and appendix that we would present at 10 am the next day”.

To qualify for the final, the CUBS team would need to better the University of Toronto’s score by five points and accumulate enough points to see off the challenge from Dublin Technological University.

Every point would count as the CUBS quartet we’re called into a holding room before the presentation.

However, the tension soon gave way to relief after the judging panel, which included senior representatives from CN Rail and IBM, announced that the CUBS team had topped their division by a single point.

With little time to celebrate, the CUBS students immediately began to prepare for the finals. At 12:00 pm, they received feedback from the judges, before returning to the holding area where they gathered their thoughts before making a final presentation at 5 pm.

“That final day was surreal. We were exhausted. After we qualified it was hard to know whether we should sleep or spend all our available time preparing for the final.

Because we weren’t allowed to communicate with each other before the presentation, you could feel almost feel the tension in the holding room.

We were in there for six hours just going over the presentation in our heads time and again. At one point, a chaperone asked us to stop whispering to ourselves. It was full on.

Just before we were called to present at 5:30 pm, you could feel the release of nervous energy. We became energised instantaneously.

The judges announced the winner at dinner that evening. Unfortunately for us, it wasn’t to be, but the entire experience was incredible”.

Since returning to Cork, the students have been preparing for their exams and keeping an eye on any opportunities that might develop after graduation.