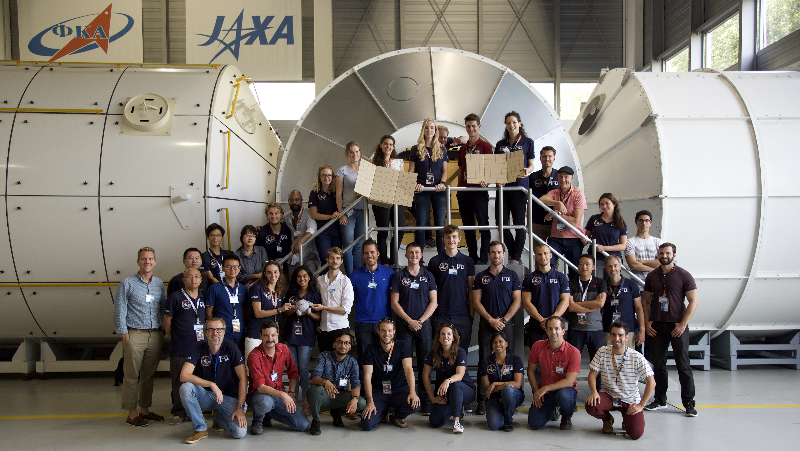 For the final nine weeks of the six-month placement programme in Business Information Systems, I was fortunate enough to be a Participant of the International Space University’s Space Studies Program 2018 (SSP18) which took place in the Netherlands from June 25-August 24 2018.

The Space Studies Program is a graduate level professional development program run every year by ISU since the summer of 1988. The curriculum covers the principal space related fields, both non-technical and technical, and ranges from policy and law, business and management and humanities to life sciences, engineering, physical sciences and space applications.

This year’s Program was made up of 135 incredible people representing 36 countries, and we spent the first few weeks of SSP18 getting to know each other through team building exercises and culture nights after a long day of lectures and workshops. The first half of the Program is primarily focused on the core lecture series. In total, 57 lectures covering a wide variety of topics - ranging from orbital mechanics to space law - were covered to provide us with a high-level overview of all aspects relating to space.

Our first lecture was titled “Origins of the Space Age: Dreams, Rockets, Rivalries, and Jobs” and would be delivered by former NASA astronaut Jeff Hoffman.

Hoffman, who flew five times into space aboard the space shuttle, is quite the legendary figure at the International Space University. He has been lecturing at the Space Studies Program ever since its inception and returns every year to deliver two lessons on the history of space exploration, and microgravity. Hoffman’s nickname at SSP is “Hubble Repair Man” owing to the fact that he was on the first mission to repair the Hubble Space Telescope in 1993.

What is so unique about the Space Studies Program is the opportunity participants are afforded to interact with visiting lectures and world-leading experts from NASA, the European Space Agency, as well as private space companies like Elon Musk’s SpaceX and Jeff Bezos’ Blue Origin.

At SSP, it was not uncommon to start your day by talking over coffee with an astronomer who makes a living looking for planets orbiting other stars in the Universe, and finish the day with a few beers while listening to an astronaut describing how they felt the very first time they saw the Earth from space – a view that only 536 people have ever been able to experience since Yuri Gagarin first slipped the surly bonds of Earth in April 1961.

For the last few weeks of the Program, our time was completely devoted to activities within the Team Project group each Participant was assigned to. The Team Project I chose to participate in was called ‘Lunar Night Survival.’

The reason I applied to be part of this project is because right now, the international space community is developing advanced plans to return to the Moon with human and robotic presence and activities towards the end of the next decade. This time, humans will stay longer, with robotic support, and increase the level of sustainability of the presence along the way.

The highlight of the Team Project, and perhaps of the entire Program was the day we conducted a simulated Moon mission at the European Astronaut Centre in Cologne, Germany. EAC is the base for the European Space Agency’s 14 astronauts, and the scenario simulated how a Mission Control teams on Earth, a proximity team of astronauts orbiting the Moon, and an astronaut team on the Moon’s surface would work together. We were also very fortunate to be able to use the Robotics and Virtual Reality Lab used by astronauts in their training for missions to the International Space Station.

I can honestly say that SSP18 was by far and away the greatest experience of my entire life so far! Between having lunch with a man who fixed the Hubble Space Telescope, and the stellar group of people I got to work with and get to know during my short nine weeks in the Netherlands, it will take me a very long time to fully comprehend the awesomeness of our SSP18 experience.

However, the story I feel best summarises the Space Studies Program experience, and the sheer calibre of people we were exposed to during our nine weeks together was an interaction I had on the day of the Closing Ceremony.

I was sitting at the breakfast table eating my Coco Pops as I did pretty much every morning for nine weeks, when suddenly I felt a soft tap on my shoulder.

“Are you a Yankees fan?” I heard a man say as he stood behind me dressed in a suit and tie and wearing a NASA lapel pin, while pointing to the New York Yankees t-shirt I was wearing.

“I’m not unfortunately. I’m actually Irish but I saw them play a few years ago in New York” I replied.

“Oh really? What part of Ireland are you from?”

“A place called Cork in the south. Do you know it?”

The 2017 Space Studies Program was held in Cork, so luckily most people at SSP were familiar with it.

“Of course I know it.. my grandfather was from Castletownbere! My name’s Tom. Tom Cremins.”

“  I said, and we spent the next 15 minutes talking about what he gets up to when he visits Cork every two years with his wife, his family heritage, favourite beers, and the beauty of the west coast that we both longed to go back to visit.

It was not until that night at the closing ceremony that I learned that Tom was no regular guy in a suit with a NASA lapel pin on his blazer. Shortly before the closing ceremony, our Program Director Omar took to the podium to introduce the keynote speaker for the evening’s event.

“Ladies and gentlemen, I would like to present our very distinguished speaker for this evening, NASA Chief of Staff, Mr Tom Cremins.”

Now in my final year of Business Information Systems, I have fully come to appreciate how well the course prepared me to work with people from different backgrounds, cultures and disciplines. BIS is the perfect course for someone who would like to have both a technical and non-technical skillset, as well as the ability to develop your communication and teamwork skills that are so important today, whether in the financial services industry or the space sector.

I recently applied for a PhD based on my experience at SSP18 on the topic of developing payloads capable of operating under the harsh environment of the Moon. It would be a dream come true for me to one day work for an organisation like NASA or the European Space Agency who are working every day both on the Earth and in space for the betterment of all humankind.

Acknowledgements
I am eternally grateful for the time I have been able spend with my fellow participants and the staff. What I am most looking forward to taking home from my time at SSP and reflecting on in the years to come are the wonderful relationships I have forged with people who were once complete strangers to me, and who I now consider to be my greatest friends.
I would also like to take this opportunity to thank Professor Joe Feller, Stephanie Larkin, Ciara Heavin and all the staff in the BIS Department for the constant support in making the past six months an experience that I will never forget.
I also wish to thank the Cork University Business School for their generous sponsorship in getting me to the International Space University. Without their support, none of this would every have been possible.