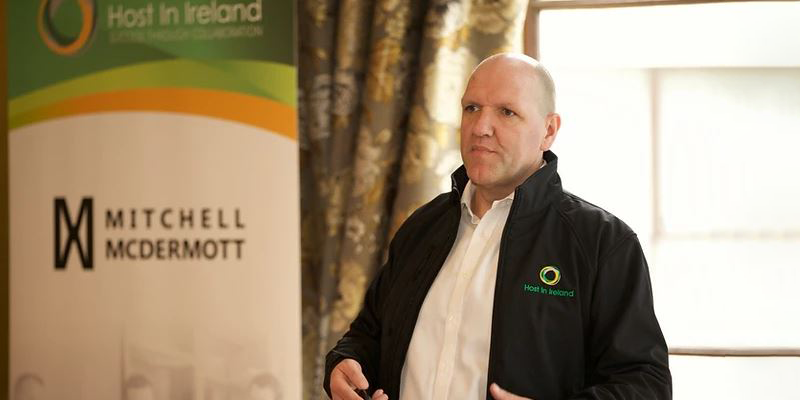 As lockdown measures began to be relaxed across Ireland, Garry Connolly was in a reflective mood when we spoke to him about the future of the data industry in Ireland.

An industry veteran, the President and Founder of Host in Ireland has witnessed how Ireland transformed itself into one of the world’s leading technological hubs.

Beginning his career in the mid-1980s, Garry unconsciously found himself at the centre of an evolutionary process that has seen the country slowly shift away from producing hardware to managing large amounts of data.

If you want to understand the value of data to Ireland, you need to go back to when IBM, Digital Equipment or Dell set up here.

What we have found is that the skills and services that are available in Ireland are highly sought after across Europe.

Big companies come here to establish data centres and they want to bring Irish people with them when they set up in other international locations.

That’s a huge endorsement of what goes on here.

Like many others who entered the burgeoning tech sector at that time, Garry’s CV reads like the embodiment of Ireland’s digital transformation.

Starting out as a software engineer before moving into sales, Garry had a keen understanding of the type of solutions that would be needed in the 90s. That insight sparked a series of highly successful entrepreneurial ventures, and ultimately, an early appreciation for the value of data.

The most important piece of advice I would give any young entrepreneur is to make sure that there is a need.

More than likely, your idea isn’t unique, so you need to really apply yourself. Knowledge doesn’t hold the same value as it once did, it’s now about how you apply knowledge.

I saw data as an asset, and I knew that the tools used to manage it already existed. To succeed, I needed to apply that knowledge.

Today’s graduates will be judged on how they apply knowledge, not on how much they know.

Garry’s interpretation of the knowledge economy is rooted in his belief that the most disruptive and innovative companies that have emerged in recent years leaned on existing technologies to deliver groundbreaking products and services.

Recalling the early 2000s, he listed off some of the search engines that burst onto the scene before Google came to dominate internet search traffic.

Segueing into Blockbuster’s failure to fully embrace digital technology, Garry went onto describe how the one time colossus of the movie rental market had all the tools necessary to dominant the streaming age, but ultimately slid toward bankruptcy.

That same lesson he observed, is still being learned today by companies who are struggling to reinvent themselves in the face of dynamic organisations like Uber and Airbnb.

At the very least, there are few inhibitors that prevent ideas becoming prototypes. In the past, you needed money to buy servers and other types of expensive equipment.

All those tools are now available as services. Young entrepreneurs and innovators who do the right things, in the right order, with the right people and for the right reasons can put themselves in a position to succeed.

Collaboration is key. You need to put yourself in positions and places that lend themselves to collaboration.

Just look at the solutions people come up with at hackathons up and down the country. It’s incredible.

At a time when the world is going through an accelerated digital transformation, where organisations have rapidly reached for technological solutions to maintain productivity and a semblance of structural normality, Garry’s words ring true.

Forbes recently estimated that the manufacturing industry will experience five years of innovation in the next 18 months due to Covid-19.

The incredible rate of advancement has created a new level of appreciation for roles that were previously taken for granted and generated an atmosphere in which organisations are open to new possibilities concerning people management.

A lot of people have been considering the impact of the pandemic and asking what it means in the longer term.

For me, Covid-19 has stress-tested every business. What does that mean?

It means that people in board rooms have realised the value in digital applications and the data required to manage them.

The IT guys, who may have been caricatured as being socially awkward not so long ago, are now keeping organisations going. CEOs and accountants now see how important it is to invest and maintain technology.

This cultural and technological change will create huge opportunities for graduates who are now studying in some of the most diverse and collaborative classrooms ever imagined.

In fact, rather than being impaired by social distancing and hybrid learning models that are now being considered worldwide, Garry believes that students will find ways to excel through innovation.