Now in their 2nd year, the College of Business and Law Researcher Awards recognises faculty who have pushed boundaries and enhanced knowledge by delivering cutting-edge, high-impact research.

Established as an annual event, the awards have become hugely popular among faculty after organisers saw the number of applications double since last year.

Hosted online by the College Research Manager, Dr Sean Lucey, the awards recognises researchers at various stages of their careers, as well as acknowledging the impact of the College’s research teams.

Two CUBS researchers received accolades, Dr Ioannis Skevas, Department of Food Business and Development, and Professor Anthony McDonnell, Department of Management & Marketing, while the Human Resource Research Centre, was named as one of two Research Teams of the Year.

Speaking at the ceremony, Professor Ursula Kilkelly, Head of the College of Business and Law, praised each of the winners, before adding that “the researcher awards ceremony recognises research excellence and the extensive contributions made by the College researchers”.

“The awards are made to researchers who have made exceptional and very influential research contributions, enhanced knowledge, and raised the national and international research profile of the College”. 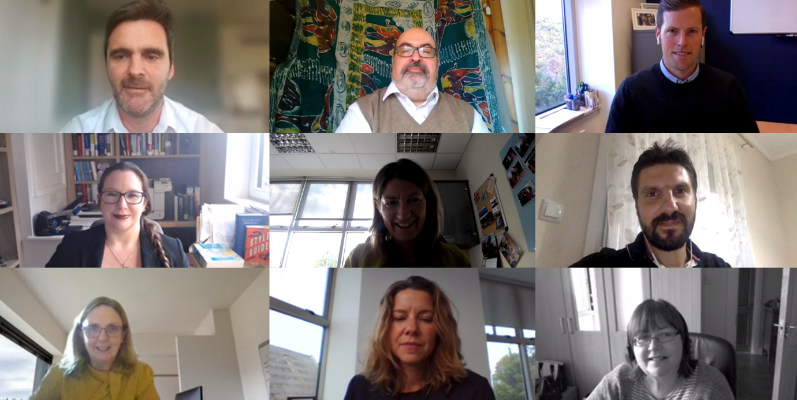 Professor Anita Maguire, Vice President for Research & Innovation at UCC, paid tribute to the organisers, commenting that the awards, which form part of the College of Businesses and Law’s research strategy, “align with the University’s research strategy”.

Professor Matthias Beck, Vice Dean of Research and Innovation at Cork University Business School, said that he was “pleased to see the number of applicants double since last year”, before adding that that he is also “delighted to see research impact increase”.

Dr Justin Doran, Co-Director of the the Spatial and Regional Economics Research Centre, demonstrated how the College Awards can act as a springboard for further recognition.

We gained significant visibility after winnng the College Award in 2019, which led to increased collaboration with colleagues across the University.

Because we learned so much from the application process, the College Awards acted as a stepping stone to the Centre being awarded the UCC Research Team of the Year prize in 2020.

Dr Skevas was named as the Early Career Researcher of the Year after publishing three papers in high impact journals during the last twelve months. The organisers were particularly impressed by his single-authored publication in the European Journal of Operational Research, which is considered to be a top field journal and ranked a four-star publication by the Association of Business Schools list.

The Mid Career Researcher of the Year accolade went to Professor Anthony McDonnell, who has authored five journal articles and four book chapters in the last twelve months. While another paper was also nominated as one of the best papers in the 2020 International Management Division of the Academy of Management Conference, the most eminent management academic conference globally.

The Human Resource Research Centre shared the Research Team of the Year award with JCOERE – Judicial Co-Operation supporting Economic Recovery in Europe - after having 18 peer-reviewed journal articles published, including five in journals ranked as a four-star in the Chartered ABS guide, and five further contributions in three-star ranked journals.