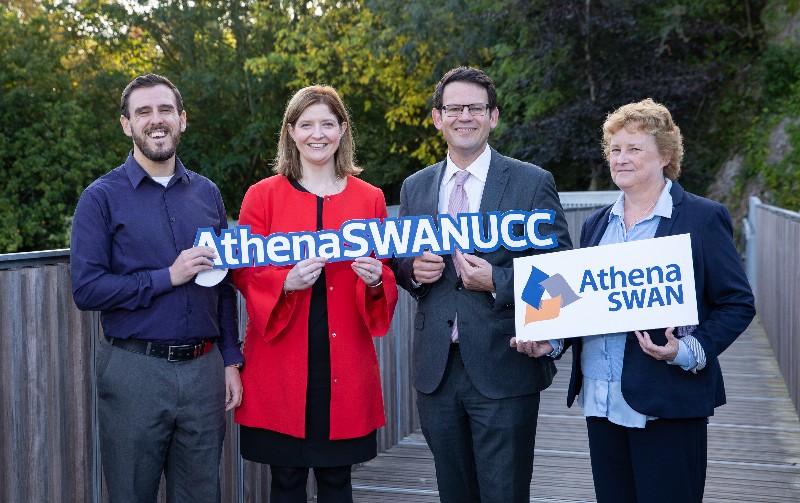 UCC’s efforts to promote gender equality have been recognised with the awarding of two significant awards.

The Athena SWAN Charter was established in 2005 to encourage and recognise commitment to advancing the careers of women in science, technology, engineering, maths and medicine (STEMM) employment in higher education and research.

These awards today follow on from the bronze awards granted to the Schools of Biological, Earth & Environmental Sciences (BEES), Pharmacy and Chemistry in 2018.

"Athena SWAN is about creating better working environments for all staff and for our students. The application process involves a serious and thorough gender equality self-assessment. The self-assessment is led by School staff, meaning that it involves a sincere effort at local cultural change. I congratulate and thank all colleagues whose hard work and commitment to gender equality is recognised in these awards"

Prof O'Halloran stated the submission process is "challenging but very much worth the effort in terms of progressing the local focus on equality. We look forward to further departments applying in November 2019 and in every April and November submission cycle".

BIS and Food and Nutritional Science are now implementing equality action plans, aimed at improving workplace practices to benefit everyone. The Schools were supported in developing their action plans by the Athena SWAN team, who form part of UCC’s Equality, Diversity and Inclusion (EDI) Unit.

UCC EDI Director Dr Karl Kitching noted “the action plans are an important indication of how equality and diversity principles are being embedded in everyday practice at local unit level in UCC, and our new institutional action plan will focus on a range of equality issues including but not limited to gender equality”.

All Irish HEIs are signatories to the Athena SWAN Charter principles, which have expanded to include not just science and medicine, but also disciplines in the arts, humanities, social sciences, business and law. UCC, which has held an institutional Athena SWAN award since 2016 and is currently finalising its application for a second Bronze award (November 2019).

The award success was announced by the UK-based Advance HE.