A PHD JOURNEY WITH DEEPER SIGNIFICANCE 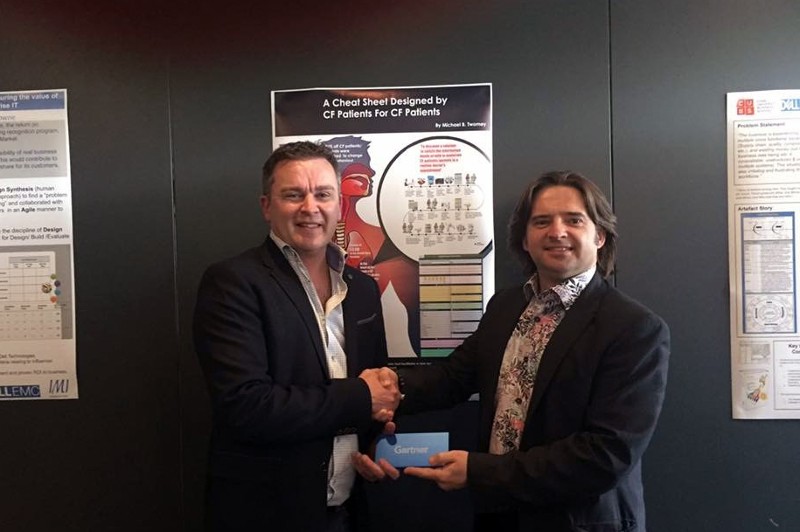 For many PhD students, their personal research journey can be a very rewarding one. Committed to advancing knowledge, they devote whole portions of their lives to developing research that meets the rigorous standards of peer review.

Michael Twomey’s PhD journey was of deeper significance however. A cystic fibrosis patient, Michael set out to improve the lives of those impacted by the genetic disorder by exploring ways of augmenting memory recall during a medical appointment.

In doing so, Michael took on the additional challenge of being a patient researcher, constantly striving to strike a balance between conducting empirical research and not becoming too emotionally involved.

"From a psychological perspective, medical appointments are hugely complex with numerous variables.

For patients with a chronic illness, appointments can be particularly stressful, and hence effect cognitive function.

This can lead to the sharing of inaccurate information which could potentially result in misdiagnosis.

So, I set out to develop a two-fold solution that would reduce stress for patients/carers, increase their empowerment and improve data quality for clinicians, thereby facilitating improved decision making within the medical appointment.

Funded by the Irish Research Council, Michael not only explored patient/carer cognition within behind medical appointments, he examined ways of enabling better information quality before, during and after the medical appointment.

The result of his painstaking research has been the publication of a colour coded medical appointment check list (now in a booklet form) and the ongoing development of a complementary app that includes a symptom tracker.

Surprisingly simple at first glance, the check list invites patients to complete sections before and during a medical appointment, which act as a point of reference at a later date, lending itself to an autobiographical account of medical events.

It isn’t until Michael begins to explain the science behind the design of the check list that you begin to appreciate the huge amount of effort behind its creation.

"What’s surprising however, is that something so simple can have such an effect.

I look at it sometimes and think about all of the science that has gone into developing it.

Because a lot of patients/carers actually forget to report symptoms or ask questions during appointments due to stress, the psychological component included in the design of the check list is also crucial, as the mind has such an effect on the well-being of the body, and hence on the chronic condition itself.

We had to ensure that sections within the check list immediately popped out at the reader within the appointment, grabbing the attention of the patient/carer, so a huge number of factors informed its structure, categorisation and colour.

Allotting those saved minutes in a doctor’s surgery can mean an awful lot to a patient/carer, easing psychological burden, as more often than not, they have several questions/concerns to be answered or clarified.

Michael’s check list is already having a real impact. Cystic Fibrosis Ireland, who were an active participant in the development of the check list, have distributed it to each of the 1,200 families affected by the condition in Ireland.

The feedback has been both instantaneous and unquestionably positive. Soon after the publication of the check list, one carer included a picture of her son holding it in a hugely appreciative email.

A senior clinical psychologist in Galway also emailed Michael expressing her appreciation for the check list, she has agreed to partner in a future research project with Michael regarding teenage CF patients, and their usage of the check list, and the impacts of same on their wellbeing.

The check list is only half the story. Michael is also currently developing an app that has the potential to work in tandem with the check list.

"The check list works very well because it doesn’t interfere with the discourse of an appointment.

Nevertheless, because of some practical drawbacks, like having to carry it around and not being able to back it up or interrogate the data, we felt the need to develop the app.

The app replicates much of what the check list does, but crucially it also includes a symptom tracker that allows patients to record their symptoms over time, between appointment A and appointment B.

This facilitates the capture of the other essential fragments of a patient’s medical history, data that is often lost.

This is the level of specificity that a doctor requires in order to assemble an overall picture of the patient’s health and to make an accurate diagnosis and hence to stipulate the right therapy regime.

The information acquired, can therefore provide clinicians with a more holistic overview of someone’s health rather than a snapshot recorded during an appointment.

Sometimes the data we relay to clinicians in a medical appointment setting tends to lack objectivity. If I go into an appointment feeling great, I tend to put too much of a positive spin on my condition, and the reverse is true if I’m feeling unwell.

By providing objective data, the app has the potential to alleviate this problem and ensure better data quality.

The app, which is has just concluded its second iteration, has the potential to make a significant impact on the lives of patients in future.

The ability to scrutinise a variety of data sources could provide clinicians with 360° view of the condition in Ireland and allow them to offer patients more effective treatments based on factors that are currently overlooked.

If each of the 1,200 CF patients in Ireland used the app, we could cross pollinate all sorts of data (e.g. environmental) with the data set we acquire.

Analysing that data could reveal correlations between symptoms and environmental circumstances or the effects of taking particular combinations of medication.

That’s where the richness is.

"Eventually, I would like to see a system where patients wouldn’t need to enter any data, where wearable technologies including implantable bio-sensors would pick up on anomalies, feeding directly into the cloud and alert clinicians - who could then act to prevent illness progression. Keeping healthy is what it’s all about, so patients and carers can get on with living their lives and contributing to society."

Given the fast-paced nature of the digital health sphere, that future might not be too far away, however as Michael’s check list proves, something as simple as a well-researched check list, can have a huge effect on the lives of patients.