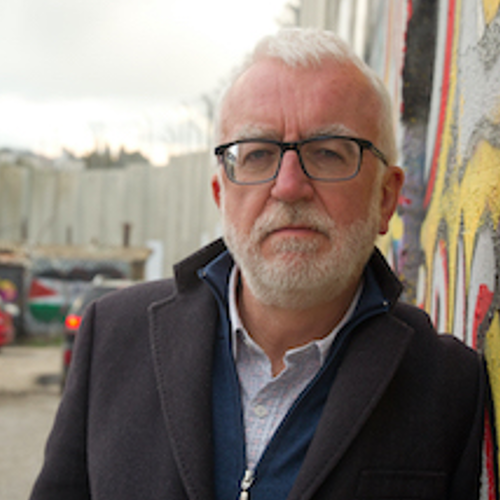 Adjunct Professor in the Department of Food Business and Development

For the past two decades, I have worked as a documentary filmmaker. I have presented, produced and occasionally directed over fifty documentaries across Africa, Asia and the Americas for RTÉ’s preeminent Global Affairs series What in the World? Initially, the series was concerned with illuminating the ways in which neoliberal capitalism has impacted the lives of the poor, the dispossessed, the disfavoured and the disenfranchised of the world. Towards that end, films considered the impact of industrial sized fishing on coastal communities off the coast of West Africa (Senegal), the human cost of resource extraction in Bolivia and Angola and the filtering of profits to northern hemisphere countries and the ways in which the right to roam is being squeezed in Mongolia in favour of transnational mining companies.

Latterly, I have focused on the military industrial complex and its impact on civilian lives in some of the most conflict-ridden countries in the world. This includes a film about Somalia, where the biggest bomb in all of Africa and the biggest single global atrocity since 9/11 occurred on 14 October 2018. The destruction of the city of Aleppo, once known as ‘the most beautiful and elegant city in the world’ was the focus of another film. The sheer terror and trauma experienced by the people of Iraq and Afghanistan following the US-led invasions was considered by another.

From 1980 until 2000, I worked as a second level teacher (Ennis Vocational School and St. Patrick’s Comprehensive School, Shannon). During that time, I was seconded both to the Shannon Curriculum Development Centre and to the Gender Equality Unit of the Department of Education. I was involved in the development of the Civic, Social and Personal Education (CSPE) the Leaving Certificate Applied (LCA). I was national director of the Department of Education’s Exploring Masculinities programme.

I’m a member of the UBUNTU network, a network of university lecturers and others concerned with integrating global citizenship, sustainable development and social justice in Initial Teacher Education (ITE).

I’m currently a member of the Irish Chapter of World BEYOND War.

Previously, I was chair of the youth diversion project Togher Link-Up, chair of the Southern Regional Drugs Task Force and a member of Board of Cork Educate Together Secondary School.

King, P. and Jones, A. The Art of Clare: Art, Landscape and the People of Co. Clare The Liffey Press. Dublin (in press)

King, P. 2013. What in the World? Political Travels in Africa, Asia and the Americas. The Liffey Press. Dublin.

King, P. 2003. The Politics of Drugs from production to consumption. The Liffey Press. Dublin.

King, P. 2020 Training of Trainers A Toolkit for Active Learning in the Adult and Community sector. Saolta. Drogheda, Co. Louth

King, P. 2012 The Politics of Smiling: US Presidential elections and their aftermath. TUI Journal. Dublin.

King, P. The people of Israel and Palestine who crave the fighting to end rte.ie 17 May 2019